Possums and opossums are types of animals, specifically marsupials. They are not the same animal, and have many different characteristics, but confusion reigns for a number of reasons: First, the spelling of possum and opossum is quite similar; second, the animals look slightly similar; and, last, the most common species of opossum in North America, the Virginia opossum, is often referred to as a possum.

Even after reading that, you might still be confused, so we will try to breakdown the difference between opossum and possum with some simple definitions.

What’s the Difference Between Possum and Opossum?

A possum is a type of marsupial, native to Australasia. The official name for this species of marsupial is Phalangeriformes, but the common name possums has entered into modern usage. An opossum is also a type of marsupial, but one that is native to the Americas, from the order Didelphimorphia. People will often use the terms interchangeably, a bit like buffalo and bison, but it is important to remember we are referencing two different animal groups. In short:

When to Use Possum

Use possum or possums when referring to the marsupials, Phalangeriformes. These animals can be found in Australia and other Oceanic countries and are usually tree-dwelling.

Features of the Possum

There are around 70 different species of possum, most of which will be found in Australia and other parts of Oceania. They are mainly arboreal (tree-dwelling) creatures. Common varieties of possum include the brushtail possum and ringtail possum. Possums are nocturnal creatures, which are often characterized by their prehensile tails. This means their tails act like a fifth limb, allowing possums to use their tails to grasp and hang from tree branches.

When to Use Opossum

Use opossum or opossums when referring to the marsupial native to the Americas. Most commonly, this will refer to the Virginia opossum, the only species of opossum found in the USA and Canada.

Features of the Opossum

Opossums , perhaps unjustly, are regarded as fierce creatures, probably due to the sharp teeth that characterize the Virginia opossum. That species is often referred to as possum, which can lead to some confusion. The Virginia opossum will usually have a white face, coarse gray fur and black ears, and are around the same size as a domestic cat. Opossums are as comfortable in the trees as they are on the ground, although they do not have the prehensile tail like the possums of Australia.

The meaning of “Playing Possum”

An opossum has a distinctive defense mechility in order to trick an opponent and gain an advantage over them. For example, a boxer might “ play possum” by pretending to be injured or on the verge of defeat in order to lead their opponent into making a mistake. 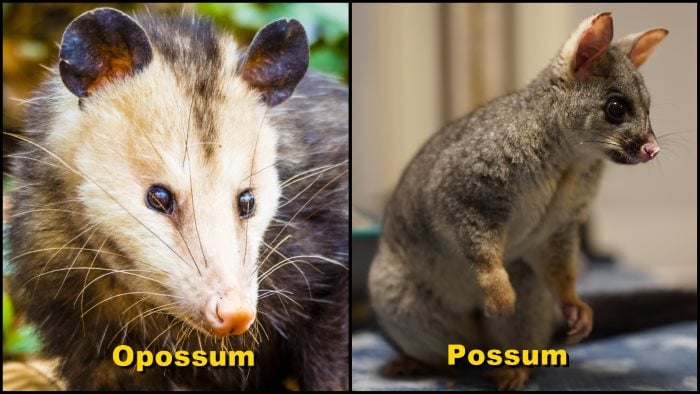 Because there are lots of words beginning with opp in English, writers can often confuse the spelling of opossum. Common errors might include:

These are all incorrect and have no meaning in English. The correct word is opossum; and remember not to confuse it with the tree-dwelling Australian possum.