Choose and chose sound and look similar and have related meanings, so they are quite often mixed up in writing. However, there are specific rules about when to use choose and chose. Confusing them will make your writing look clumsy and change the context of your sentence.

Choose vs. Chose: What is the Difference?

If choose was a regular verb, we would expect the past tense to be ‘choosed’. But it’s an irregular verb, and we use chose instead. The word ‘choosed’ does not exist in English. Neither does chosed.

Consider these two similar sentences that show the important context created by choose and chose:

When to Use Choose + Original Examples

Use choose when describing the action of picking something in the present tense:

Remember that choose is a verb, so it must agree with its subject:

If choose takes an auxiliary verb, like go or will, it can form the future tense:

When to Use Chose + Original Examples

Use chose when describing the action of picking something in the simple past tense:

*Chosen can also be used to modify a noun, such as the chosen one or God’s chosen people.

How to remember the difference between choose and chose? Some grammarians will advise that you should think about the fact choose is happening in the present, suggesting you should look at the double ‘O’ and associate it with double ‘O’ words like soon, i.e. if you choose now it will happen soon. You could also focus on the fact that chose and past are shorter words than choose and present.

Another good tip is to replace the sentence with those regular verbs that are synonyms of choose and chose. For example:

We know chose is right because last night is telling us it is in the past, but we can double check with these past tense synonyms of chose, all of which are regular verbs ending in ‘ed’.

Similarly, we can double check the use of choose with its present tense synonyms. 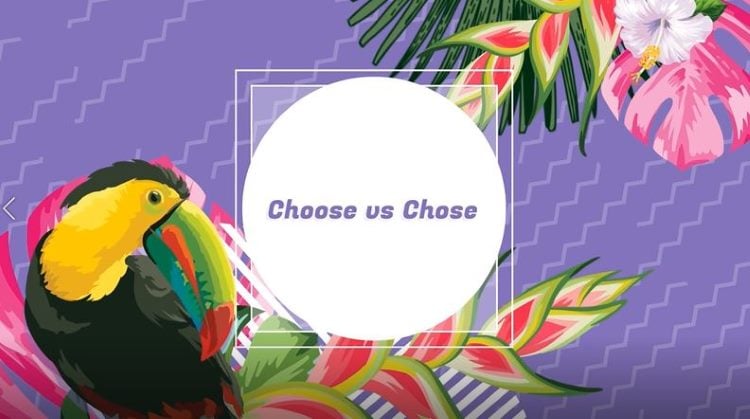 While it can be tricky to remember the difference between choose and chose, there is a clear difference in the usage of the words. Chose is always the (simple) past tense, whereas choose is always the present tense or the future tense when combined with an auxiliary verb. Using choose and chose correctly is important for the context of your sentence, i.e. when the action of choosing took place.

Some more original examples of choose and chose in English: