Lay vs Lie or Laying vs Lying

Even though they do not look that similar, lay and lie are two commonly confused words. The problem comes with the fact that lay and lie have similar meanings, but it becomes even more complicated as lay is also used as the past tense of lie.

Let’s break down the meanings of the two words lay and lie first. Note that both words have other meanings than what is described below. These will be discussed later.

Lie is a verb meaning to recline in a horizontal position on a supporting device like a bed or couch.

Lay is a verb meaning to put something down on a surface, normally in a gentle manner.

Confusion reigns, therefore, when people confuse the tenses of lie:

What Does Lay Mean?

Lay is used as a verb to mean to set something down gently or carefully, allowing it to assume a resting place on a surface. In this sense, lay is an action that you do with something, i.e. place something down. It needs a direct object (a book, a blanket etc.) for the action to be performed on. As we have seen above, lay is also the past tense of lie.

Other meanings of lay:

Lay can be used formally and colloquially in the following ways:

As a verb meaning to produce an egg from a body:

As a verb meaning to express:

As a verb meaning to bet on something:

When to Use Lay + Original Examples

We use lay as a verb when we are talking about putting something down on to another surface. Remember that lay is a verb, so it is subject to conjugation and agreement.

*To lay a hand is a phrasal verb, meaning to hit or to strike violently.

We also use lay as the past tense of lie:

What does Lie Mean?

Lie means to assume a horizontal position as a resting place. For example, if we go to sleep, we will need to lie (down) on a bed first. In this sense, lie is something that you or something else does – the verb does not need a direct object.

Other meanings of lie:

As a verb to meaning to tell an untruth or say something that is false: It is important to note that this version of the word lie has a different past tense – lied.

As a verb to meaning to stay or be in a certain state:

As a verb meaning to reside in or to be found in:

As a verb meaning to be in a specific direction, location or position:

When to Use Lie + Original Examples

We use lie as a verb when we are talking about ourselves or something else assuming a horizontal position on a couch, bed, floor etc. Remember that lie is a verb, so it is subjected to conjugation and agreement.

We also use lie as a verb, meaning to speak falsely or create untruths: 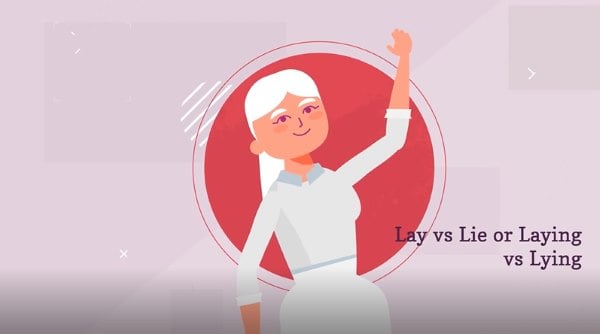 If you focus on li in recline and la in place, this should help you remember the difference between lie and lay.

Consider these final examples of lay and lie:

Both of those examples are in the present tense. Notice that in the second example, her head is the direct object of lays. Even though we are speaking of a body party, lay is correct because you are placing something (your head) on the bed. In the first example, there is no direct object, so lie is correct.

And in the past tense of lie and lay: