Grey or Gray? What is the difference? Ginger Software
Spelling Book
Spelling Book > Confusing words index > grey vs. or vs. gray

Gray and Grey are words that have exactly the same meaning. The only difference is that grey is used predominately in British English, whereas gray is used in American English. The words are mostly used as an adjective, i.e. to describe the intermediate color between black and white, but they can also be used as a noun and verb.

How to Spell the Color Gray?

Gray vs. Grey – What is the Difference?

There is no difference between grey and gray, except for the spelling and the fact one is used in American English and the other in British English. Look at how grey and gray are interchangeable in these examples: 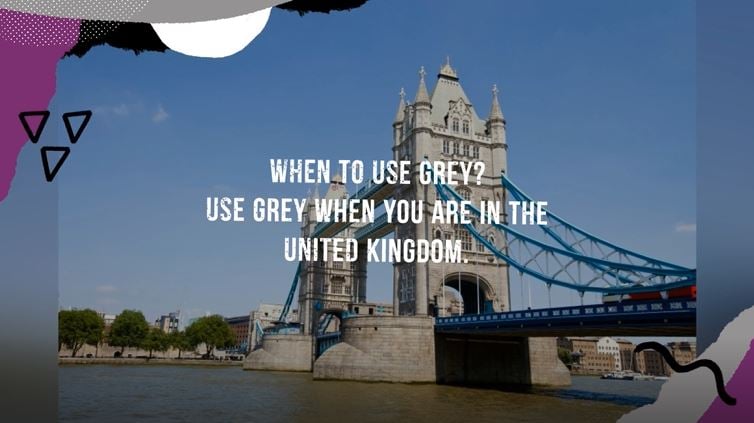 When to use Grey

Use grey when you are in the United Kingdom or communicating in British English. If you find yourself in London, you might remark that most of the week the skies have been grey. If you have received a letter from a friend in Manchester, they might tell you that their hair has turned grey. 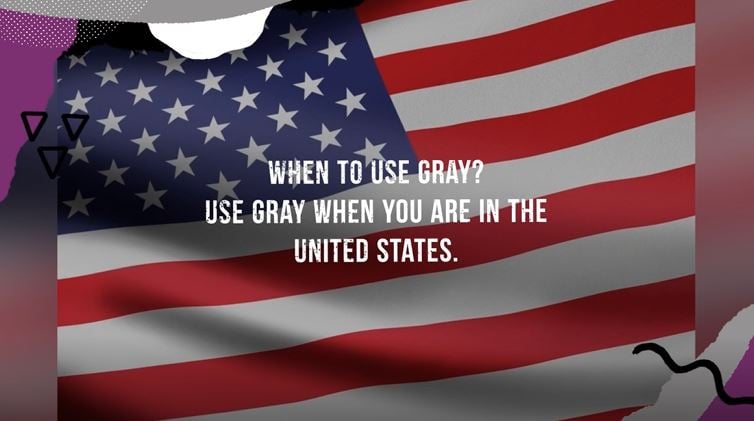 When to use Gray

Use gray when you are in the United States or communicating in American English. If you find yourself in New York City, you might notice some huge gray buildings. If you travel to a ranch in Texas, you might notice that some horses are a beautiful gray color.

As mentioned, gray and grey are interchangeable. Indeed, the difference in pronunciation is undetectable when the words are spoken. Even in scientific circles, such as when talking about brains as grey/gray matter, will use the words interchangeably. Moreover, most British and American speakers would understand what you meant should you mix up the two words.

However, there are some exceptions, namely when the words are proper nouns or have historical connotations. For example, Earl Grey tea, which is named after an English aristocrat, does not become Earl Gray tea when it’s consumed in America.

Another, more recent example is the 50 Shades of Grey movies and books. In this instance, Grey is the surname of one of the main characters, with the title also being used as wordplay on the color grey/gray. In this case, as a name, Grey is accepted in both America and the United Kingdom and doesn’t change spelling. For the same reasons, Oscar Wilde’s Picture of Dorian Gray would not be altered if published in the UK. Indeed, there is a general rule in language that proper nouns should never be changed, regardless of where you are in the world.

Similarly, words that have grey or gray as a root, like greyhound or grayling (type of fish), stay the same, regardless of which side of the Atlantic Ocean they are used.

Here are some examples of gray used in American English:

Here are some examples of grey used in British English: