Alumnus and alumni are Latin terms, which are chiefly used to denote a person or group of people who have previously attended or graduated from a college or school. In practice, the terms are often used for graduates of the school and not just those who attended, but according to most dictionaries, the terms can be used for attendees as well as grads.

Latin terms are popular when referencing colleges and universities. You will often hear the term alma mater, which literally means nourishing mother, as a way of referring to the school, university or college that a person formerly attended.

Alumnus vs Alumni What is the Difference?

Alumnus is used to denote a male former pupil of a college or school. For example:

Alumni is the plural of alumnus, so it is used to denote a group of male former pupils of a college or school. For example:

In addition, alumni is also used as a term to denote a group of former pupils of mixed gender, i.e. male and female former pupils. However, alumni should not be used for a group of exclusively female pupils, as in Latin, nouns are differentiated by gender. For example,

What are Alumnus, Alumni, Alumna, Alum and Alumnae?

As you have seen, these Latin terms used to denote former pupils are gender specific. Below is an overview of the definitions:

In addition to these terms, you may also come across the words alum and alums. These are shortened versions of the words above, which have entered into common usage as slang. Alum and its plural, alums, can refer to pupils of either gender. While they are informal terms, they are accepted by several major style guides.

When to Use Alumni?

Use alumni when referring to a group of only males, or group of men and women, in relation to their former school or college.

When to Use Alumnus?

Use alumnus when referring to an individual male in relation to his former school or college.

When to Use Alumna?

Use alumna when referring to an individual female in relation to her former school or college.

When to Use Alumnae?

Use alumnae when referring to a group of females in reference to their former school or college. 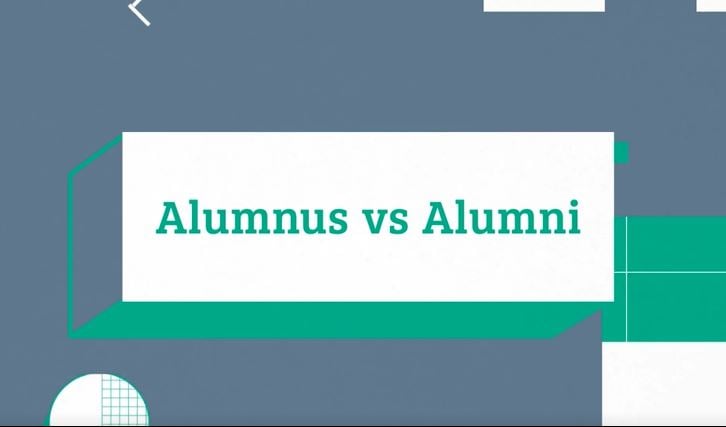 When to Use Alum or Alums?

Use alums or alum when referring to a single person or a group of any gender in reference to their former school or college.

Other Uses of Alumni and Alumnus

Additionally, and a little less common than when referring to schools, alumnus and all its variants can be used to describe someone who has participated in a group, club, or team.