As they have similar spellings and related meanings, advise and advice are often confused in speech and writing. In fact, advice and advise are both used in the same context and situations, i.e. when offering an opinion or counsel. But, grammatically, the use of advise and advice is very different, so it’s important to know the difference.

Advise vs. Advice — What is the Difference?

As you can see above, the main difference between advise and advice is one of grammatical form. Advise is a verb, whereas advice is a noun. Consider the following example:

The first part of the sentence, I advise, is the verb, which tells us: I am performing the action of providing counsel.Advice is used in the later part of the sentence as a noun. Essentially a noun is a word that functions as a name for a specific thing (that’s a rough definition, but it serves a purpose here). In this case, it’s a name for a recommendation or piece of guidance. Therefore, we could rewrite the sentence in this manner:

We can think about advise and advice in the following way:

Advise vs. Advice — When Should I Use Each?

We should, therefore, remember that using advice and advise is not a question of meaning, but rather how a sentence is structured. Essentially, you are asking yourself: What role does advice or advise play in the sentence? Is it the action – the verb – or is it a thing – a noun?

If the subject in your sentence is performing the act of advising, i.e. a verb is required, use advise:

Note that advise is a regular verb, so it will take conjugations like advised, advises etc. to agree with the subject and tense.

If your sentence does not have the act of advising as the main action, i.e. it is a thing and not an action, use advice:

Note that advice is deemed a mass noun in English, like furniture or garbage, meaning it has no plural form. Advices does exist in English, but it is a specific financial and legal term, not the plural of advice. 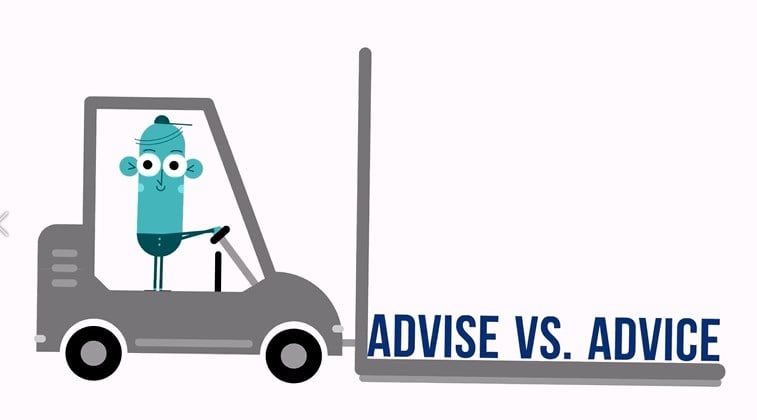 Tips to remember the difference between advice and advise usually focus on the last three letters in the spellings – ice and ise.

First of all, it should be noted that ise is a common ending for regular verbs in English: despise, surprise, improvise, supervise, televise, demise, devise.

*there are always exceptions. Dice, for example, could be a noun, such as the dice we roll for playing boardgames and casino games. But dice can also be a verb, meaning to cut something up into small cubes, or as an idiomatic verb, meaning to take a risk, e.g. he diced with death.