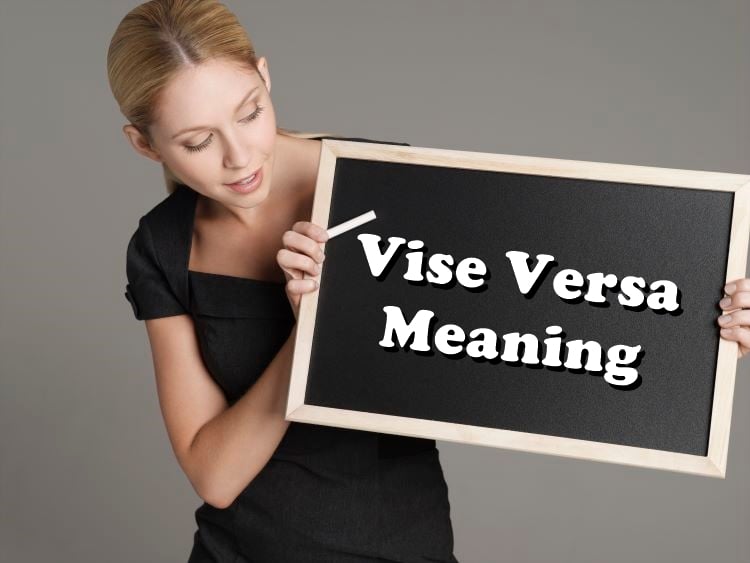 Vice versa is a Latin phrase, which is used as an adverbial phrase in English to indicate that what has just been stated is also true when the subject and object are reversed.

Instead of repeating the information about Amy not liking John, we can replace the second part of the sentence with vice versa.

The use of vice versa in the sentence above gives us the same information as the first sentence and saves us from rewriting a subject, object and verb.

In the above example, the use of vice versa informs the reader that Britain bombed Germany during the Second World War without needing to rewrite a subject, object and verb.

Vice versa is effectively another way of saying the other way around, but its definition can cover a broad range of phrases with similar meanings.

Look at this example:

So, we can replace the other way around with vice versa, giving the sentence the same meaning.

But the following clauses could also be replaced by vice versa:

All of the above phrases in bold can be replaced by vice versa, showing that the term has many (similar) definitions. Often, vice versa is viewed as a more succinct way to replace these types of phrases.

How to Use Vice Versa?

As we have seen, vice versa is used to indicate that what has previously been said is also true if the subject and object were reversed. But how do you use vice versa correctly? There are a couple of rules to using vice versa in a sentence:

Because vice versa comes from Latin, it is something mistakenly italicized by writers (as is often done with foreign words in English sentences). Almost every major style guide will advise you not to put vice versa in italics. We have italicized vice versa throughout this exercise simply because it is the topic of the post. In addition, a common mistake with vice versa is to hyphenate the two words; there is no need to do this.

A note on the pronunciation: There is some disagreement over how to pronounce vice versa. The first word, vice, is usually pronounced as it looks (rhyming with rice), yet some people pronounce it as vice-ah, giving it a second syllable. The second word, versa, is pronounced verse-ah. Because of the disagreement over how to pronounce vice, vice versa is sometimes erroneously spelled as visa versa. Don’t make this mistake: there is no such phrase as visa versa.

Vice Versa in a Sentence

Vice versa is a formal way of saying the other way around. While it is perhaps more commonly found in formal writing, it is a widely understood phrase and will also be used in less formal correspondence and speech. In modern journalism, you often see vice versa put in parentheses in a sentence.

Vice versa often appears at the end of a sentence, but it can also be used after the subject has acted on an object. For example:

Here are examples of vice versa in a sentence:

Usage grew in the 18th and 19th centuries, when the phrase was often preceded by the Latin word et (like et cetera). According to the Collins English Dictionary, visa versa has increased in usage throughout each decade of the 20th century. Collins records vice versa as one of the 10,000 most used words in modern English.

While Latin phrases are sometimes regarded as academic and, indeed, stuffy, vice versa has been widely accepted in common parlance. Vice versa’s meaning in widely understood by English speakers, although as we have seen above, there can sometimes be errors with its usage.