Than vs. Then: What's the Difference? Ginger Software
Spelling Book
Spelling Book > Confusing words index > than vs. then

What is the Difference Between Than and Then?

Than and then are often mixed up in English, partly because they have similar spelling and sound alike. However, the words then and than have very different meanings and uses in language. Then is used in several different ways relating to the element of time. It is most commonly used as an adverb and, in some specific cases, as an adjective and noun. You need to apologize, and then you can come back in. Than is a preposition and conjunction, generally conveying a comparison. Billy liked the movie more than the book.

Examples of using than and then:

When to Use Then

Then usually has a relationship with time, typically acting as an adverb, modifying other adverbs as well as adjectives and, of course, verbs. Then can be defined in the dictionary in many ways including at that time, at the same time, in that case, soon afterward, in addition, next in order (in either place or time), or as a consequence. Here is on long, multi-layered example:

My first class is English, then chemistry, then my favorite, history. In English, Mrs. DeLana told me, “If you enjoy poetry, then you should read Edgar Allan Poe. Then, when students are giving their reports, you could speak about him. There won’t be anyone else speaking about him then.”

Here are some more examples of using then:

Then can replace the words ‘at that time’ in a sentence and make grammatical sense:

Subsequently or afterwards. We use this when describing something that comes immediately after something else, either in time or in order:

At that particular time. Here it is used in the past:

Here, then is used to describe a specific time, but one in the future:

When to Use Than

Than is a conjunction and is always used to introduce a comparison, often with words like bigger, fewer, less, older and younger, so it would be bigger than, fewer than, and so forth. The use of than is highly specific and it is very difficult to replace it in a sentence with another word without changing the meaning.

Examples of than in a sentence:

While we mentioned that than is not easily replaceable in a sentence, it can be used in sentences that are don’t make direct comparisons. In these circumstances, than can be replaced in the sentence:

Than is one of the most common words in English, and as mentioned above, its use is highly specific. It crops up in many common proverbs and idioms, with some examples listed below:

Then doesn’t come up as much as than in famous idioms and proverbs, but we have provided some examples of common phrases that use then: 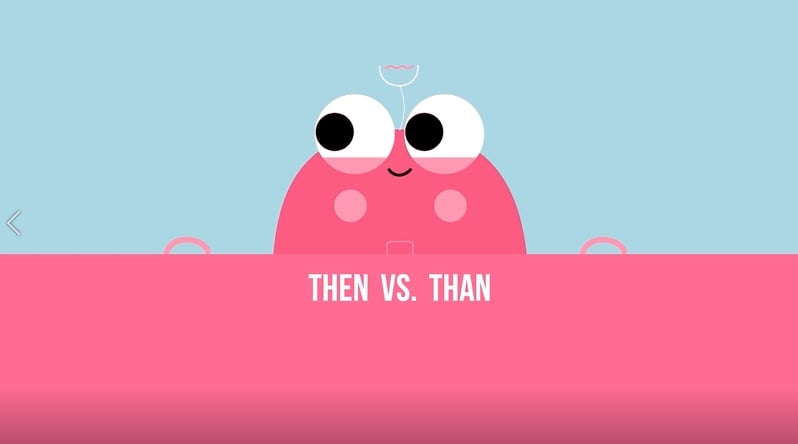 Then vs Than: How to Remember the Difference

Then as an Adjective and a Noun

Then can be used as a noun and an adjective but only under certain circumstances. As an adjective, then is used meaning existing, being such, or being at the time specified.

Mainly, then as an adjective is used like the word former to denote a person’s former identity or role. It will almost always be used when speaking of the past. Technically, then should be hyphenated with the noun that follows it, but it seems to be a rule commonly ignored by in modern writing.

As a noun, then means that time.

Then used as a noun.

Then Used Mostly in Spoken English

In spoken English, and written in text messages as well, then can be used to express an agreement has been reached