Race vs Ethnicity – What’s the Difference?

Therefore, we can take the following two statements to be true:

So, how does this work in practice? Well, it can be quite confusing. For example, in the United States, we often hear the term Latino or Hispanic, which is generally used to describe someone of Central or South American, or other Spanish-speaking, culture. Hispanics (technically, the ethnic group should be referred to as Spaniard, but this has fallen out of general usage) are the second-largest ethnic group in the US, after the ethnic group termed non-Hispanic whites. However, we will also see media stories erroneously labeling differences between the two groups as racial, when, in fact, Hispanics and non-Hispanic whites (mostly) belong to the same race – Caucasian. Although, it is perfectly possible to be Hispanic and black, sometimes referred to as Black Hispanic.

Still confused? Don’t worry, it’s a difficult concept to grasp, one that transcends simple rules of language and moves into an area of political and cultural sensitivity. However, we can still strip it back to the base concept: Race has to do with physical characteristics and ethnicity has to do with cultural, national, religious and linguistic heritage.

When to Use Race

Talking about race can be a sensitive topic, even when discussing it as a linguistic subject. Indeed, there isn’t even complete consensus as to how many races exist, or how many have existed throughout human history.

As you might imagine, these terms are very broad, and potentially difficult and sensitive to use. For example, in the United States, the race described as white or Caucasian covers Europeans (including descendent Hispanics in the Americas), Arabs, North Africans and parts of West, Central and South Asia. The problem lies in that white or Caucasian has become synonymous with the idea of the white European or white North American, and it is thus mistakenly used to omit Arabs, North Africans, Asians and Hispanics. For this reason, making assumptions about race – normally based on skin color – can be politically sensitive and even defined as racist.

So, for all these reasons, we use race and racial terms with the utmost sensitivity.

In the United States, the census recognizes five races:

In Brazil, the census recognizes five racial classifications as well: white, black, pardo or brown, yellow or Asian, or indigenous.

In many other countries, questions regarding racial identity are not included in the census, though in some cases ethnicity is, such as in the UK and Ireland.

Here are some examples of using race:

*Please remember: the word race can have other meanings, such as the noun to indicate a competition or contest (horse race, election race) or the verb to contest or to run quickly (he raced towards the finish line, they raced for the gold medal).

When to use Ethnicity and Ethnic Categories

We speak of ethnicity when referring to a group of people with a shared cultural, linguistic, national or religious heritage. There are, in fact, hundreds of ethnic groups in the world today making it difficult to list specific ethnic categories.

Ethnicity can be a more useful term than race, because it gives more information about a person’s cultural heritage, i.e. it tells you more specific information about that person including the cuisine they favor, the way they dress, and the holidays they celebrate. But an ethnic group could be a huge population, such as the Han Chinese (numbering around 1.3 billion), or a small group measured in dozens, such as indigenous tribes based in the Amazon or Papua New Guinea. Thus, defining the latter can be easy, because they will likely share cultural, religious, linguistic and geographical traits, but defining the former can be much more problematic, as Han Chinese groups can be spread across the world, and have different religions, languages and cultural practices.

Once again, we are faced with the problem of using ethnicity to describe something specific, because labels of ethnicity can overlap language, region, culture, ancestry, history and so on. Therefore, it’s important to be careful and measured when speaking about ethnicity, so as not to cause offense.

Look at these examples of how to use ethnicity correctly:

*The word ethnic, especially in British English, has become a catch-all term to describe non-Western culture. For example, you might hear about ethnic food or clothing stores used as an umbrella term to describe anything deemed of non-Western origin, with special emphasis on smaller ethnic-minority groups.

Using Race and Ethnicity in a Changing World

Using terms of race and ethnicity can be deemed offensive, even when the context is fully understood and there is no intention to offend. Part of the reason is that descriptions of race and ethnicity that were accepted as non-offensive in the past can be deemed offensive in the present. For example, 50 years ago it was common to use words like colored to describe African Americans, or Indian to describe Native Americans, even by media and academia. Both terms are regarded as highly offensive today and should not be used in speech or writing.

Indeed, the language of race and ethnicity is still evolving. Terms like black, people of color (now used as a broad term to describe non-whites), gypsy and many others are now publicly being scrutinized by rights groups, with a fierce debate on their offensiveness and usefulness as descriptors. Regardless of your own race or ethnicity, all of this leaves some difficulty in the choices you make for speech and writing, especially if it is in a professional capacity. 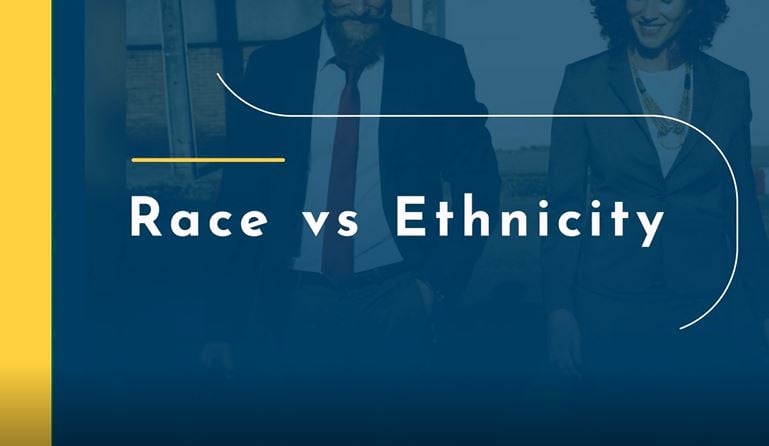 Race vs Ethnicity – How to Decide

Some grammar guides will give the tip of both ethnicity and culture having a t in the spelling, making it an easy way to remember that ethnicity is about cultural differences. Knowing the difference between the two terms is important, but we would also caution that knowing how to speak about both terms individually is important too, possibly even more so. That means your writing and speech should always stay clear of stereotypes, slurs and assumptions about race and ethnicity.