Objective and subjective are two quite commonly used adjectives, with meanings that can easily be confused, even though the two words are antonyms of each other.

The best way to think about the difference between objective and subjective is by looking at the idea of an opinion. An opinion, by its very definition, is subjective, because it is a personal view on a subject which might have other possibilities. If we say an opinion is objective, it technically no longer is an opinion because personal interpretation has been removed. This is a question still debated by philosophers, but let’s simplify it by sayingobjective has to do with unbiased observations and subjective has to do with biased (personal) evaluations.

Look at these two statements:

The first statement is an objective one. It reflects a fact, with no personal interpretation.

The second statement is a subjective one. Perhaps it is somewhat factual, perhaps not. But because it is a personal interpretation open to debate, it is said to be subjective.

The Yankees have won the most World Series Championships. Objective.

What Does Objective Mean?

When something is described as objective, it means that it is an interpretation not based on any personal feeling or emotions.Objective’s synonyms can be words like impartial or unbiased. For example, a referee in a sports game or a judge in a court would make objective decisions based on the facts before them, not allowing personal feelings to influence those decisions. 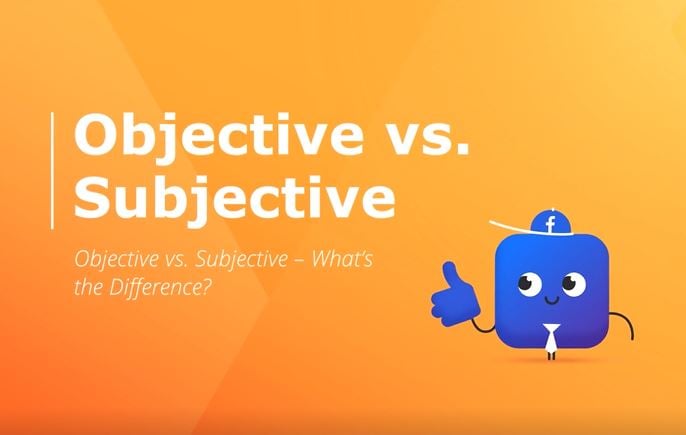 When to Use Objective + Original Examples

We use the word objective as an adjective to describe things that are factual and have no personal or emotional interpretation of those facts.

Objective can also take the adverb form, objectively. This is used to describe an action that is not influenced by personal feelings or opinions.

Objectively speaking, I can see no reason to continue your treatment.

Objective can also be used as a noun. It is completely unrelated to the description above, instead meaning a goal or target.

Objective is also used in grammar, i.e. the objective case, and as a scientific term referring to lenses in a telescope or microscope.

What Does Subjective Mean?

When something is described as subjective, it means that it is an interpretation that has been influenced by personal feelings or emotions. Synonyms for subjective could be words like personal or biased. For example, if you were giving your opinion on a movie or other piece of art, it would be regarded as a subjective interpretation.

When to Use Subjective + Original Examples

We use the word subjective to describe things that have a personal interpretation or when the factual nature of a statement can be debated:

Subjective can also take the adverb form, subjectively. This is used to describe an action that is interpreted by feelings and opinions.

Note: Subjective can also be used as a term in grammar, i.e. the subjective case.

We can break down objective and subjective as the following:

It is important to know the difference between the two terms, but the words subjective and objective are not actually used that frequently in English. However, the concepts of subjectivity and objectivity are of huge importance in journalism, science, literature, philosophy and a whole host of other areas. Whether something is subjective or objective can lead to a lot of debate, and a good philosopher could probably convince you that nothing is truly objective.

Yet, away from the worlds of science and philosophy, we should simply remember that subjective is about personal opinions and interpretations, whereas objective is about unbiased, factual observations.