Few pairs of English words get confused as often as sympathy and empathy. In speech and writing, the words get muddled up, despite having different meanings. The confusion probably comes as empathy and sympathy have similar definitions, sound similar when spoken, and they are used structurally and stylistically in the same manner. However, they have different meanings and it’s important to understand the difference between empathyand sympathy.

Definition of Sympathy and Empathy

Sympathy is tied up with the idea of sorrow and pity. If you havesympathy for someone, you feel sorry for them. Sympathy even suggests that you may be suffering distress yourself as a result of your feelings of pity for another’s misfortune. Often, we use the preposition for after sympathy.

Remember: Empathy does not always need to have a negative connotation.

Empathy and sympathy can both be used as verbs, with the differences being the same as those in the noun form of the words.

However, with both words we would normally use the preposition with.

Sympathy and empathy can also be used as adjectives, with the differences being the same as those in the noun and verb forms.

Sympathetic has some other meanings, which are sometimes used in art, literature and formal contexts. It is a little bit confusing, because the meaning is much closer to that of empathy and understanding. Don’t worry too much, as this way of using sympathetic is not very common and highly specific.

Sympathy and empathy can also appear in adverb form, with the difference in meanings again being the same as those in the noun forms.

Other Words Confused with Empathy and Sympathy

Empathy, sympathy and their variants are words with roots in Ancient Greek. As a consequence, other words can sound very similar yet have completely different meanings. Be careful of these words with similar spellings: 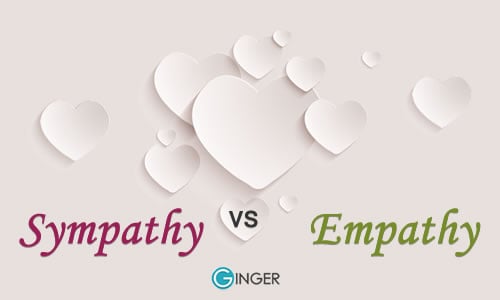 Examples of Sympathy and Empathy

Here are some more examples of sympathy, empathy and other variants of the words in sentences: