What is the Difference Between Affect and Effect?

The difference between affect and effect is one of the most common questions in grammar. In most cases, affect is used as a verb, meaning to impact, and effect is used as a noun for the result of an impact. We can affect something, which in its verb form tells us that it is we who are doing the affecting. But something can leave an effect upon us, with the noun form telling us that effect is a thing and not an action. There are some instances when effect can be used as a verb and affect as a noun, which will be discussed later.

Indeed, effect and affect have different meanings, although a quirk of language means that people usually understand the speaker or writer’s intention even when they have mixed them up. The verb affect means to change, influence or impact something. The noun effect is the result of something changing. In a way, we can think about the effect as the result of the action of affecting something. Consider this phrase:

Some more examples of the correct usage of effect and affect are shown below:

Examples of affect used as a verb:

Examples of effect used as a noun:

When to Use Affect

Affect is most commonly used as a verb and it broadly means to influence, change or impact something. We usually think of affect in the sense of being affected by something or someone:

You can tell that affect is a verb because these sentences would still make sense when reversed:

It follows that affect should be used when the action of the sentence is the impact, change, influence and so on. Affect can be synonymous with those verbs, yet there are occasions when affect is the appropriate verb to use. For example, when speaking about health, mood or performance (sport or work-related) we often use affect over synonyms like influence and impact.

Affect is usually neutral, in the sense it does not have negative or positive connotations. If, for example, we speak of a new coach affecting the performance of a football team, we would need further information to learn if the performance was good or bad. However, affect as a verb can also mean to be moved emotionally. So, if we say something like ‘the loss of his grandmother affected him immensely’, we know that affect has an emotional resonance and, quite often, a negative one.

When to Use Effect

As mentioned earlier, effect is most often used as a noun meaning a change that is a consequence, outcome or result of some particular action or cause. However, as effect is not a physical thing and is often a concept, we can sometimes overlook the fact that it is used as a noun. This is true even though effect as a noun is often preceded by the or an, though sometimes with an adjective in between.

Effect also pops up with common words and phrases to do with cinema, broadcasting or theatre production:

And, effect can also be used as an idiom – in effect. This means for all practical purposes or in fact: 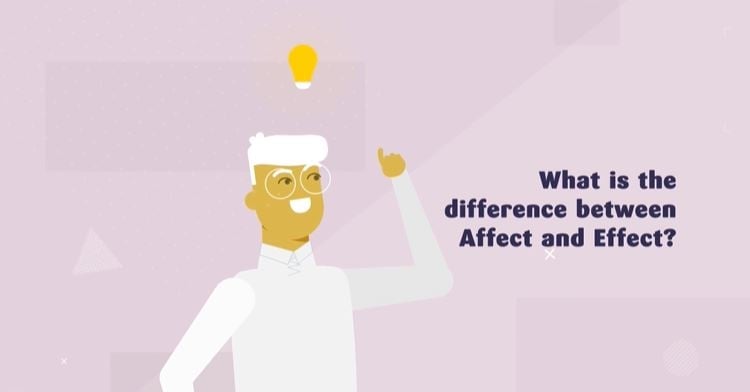 Affect vs Effect: How to Remember the Difference?

Grammar teachers will recommend different tricks to remember the difference between affect and effect. The simplest way to remember is by the letters ‘a’ and ‘e’. Affect as a verb suggests an action is taking place, so we say ‘a’ for action, ‘a’ for affect. Effect as a noun is the end-result of something that has been changed, ‘e’ for end-result, ‘e’ for effect. Another trick is the RAVEN method: Remember Affect Verb Effect Noun.

Effect as a Verb

Effect, while generally a noun, can sometimes be used as a verb, specifically with the meaning of accomplishing, producing or changing something. Very often the word change is used in the sentence alongside effect as a verb, which changes the meaning to mean implement or bring about.

Affect as a Noun

Affect, though typically a verb meaning to influence or impact, can sometimes be used as a noun when referring to a psychological experience of emotions, moods or feelings. It is not very common in everyday language. It is typically used in psychology with an emphasis on an outward emotional state.

Affected as an Adjective

Affected can be used as an adjective to mean artificial or pretentious. Again, it’s not very common in everyday language but often crops up in literature. For example, we might use affected as an adjective when referring to someone speaking with an exaggerated accent.

Affected can also be used as an adjective in the sense of being left in an emotional state:

And, it can be used as an adjective to describe something that has been influenced in a harmful manner:

Finally, affected can be used as adjective to describe a feeling of affection or gratitude for something: