When to use Accept vs Except Vs Expect

Accept, except and expect look and sound quite similar, so they are commonly mixed up in speech and writing. However, the words have very different meanings and there are no cases in English when they should be used interchangeably.

When to Use Accept + Examples

Accept is a verb. We normally use it to indicate that we agree, or we agree to take something. Remember, as it’s a verb, accept is subject to conjugation.

Accept can also mean to believe something is true.

Accept can also mean to approve of something.

When to Use Except + Examples

Except is frequently used as a preposition, meaning but.

Except can also be used as a conjunction, meaning with the exception of, only or not including. In the case of a conjunction, except is often followed by that.

In rare circumstances, except can be used as a verb, meaning to exclude or to exempt:

When to Use Expect + Examples

Expect is a verb. We normally use it to indicate we believe something will happen or to think. Remember, as it’s a verb, expect is subject to conjugation.

Expect(ing) can also mean to be pregnant or have a baby due. 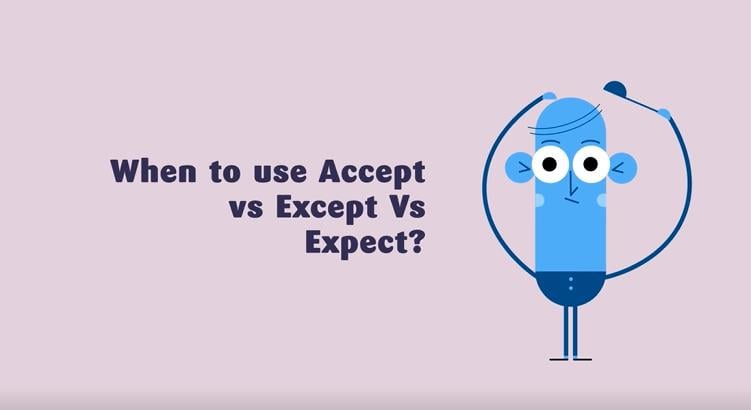 How to Remember the Difference Between Accept, Except and Expect

As you have seen above, accept, except and expect have very different meanings. Yet, the words have similar sounds and spellings, so how do we remember the difference? Most grammar guides will point to the difference between accept and except, suggesting you remember the exc in except as it also means exclude, as that word has the same first three letters. Others also suggest that you focus on the a in accept, as it is related to the word agree. Unfortunately, the words are so similar in spelling and pronunciation, it might take a bit of practice to remember which word to use.

Here are some more examples of accept, expect and except

To admit or approve; to receive

Accept his opinion; accept an award

With the exception of

There was nothing left except bread.