Correcting Grammar without Being Tagged as a Grammar Nazi 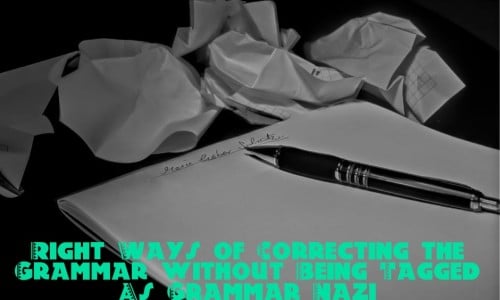 We often saw people correcting the mistakes of random people. Just for the sake of establishing my point, you also would have pointed out a mistake in the first sentence of this post in your mind. This has become our habit and we all are doing this unintentionally. That is why people with some conscience towards the non-English speaker’s tag those as the Grammar Nazi who always tries to find mistakes in their English.

However, the majority of the people who correct other’s mistakes does not share the intention of ridiculing anyone. They purely show respect towards their language and want people to speak as well as the native ones. But still, they get the tag of Grammar Nazi which is quite hurtful to that person.

That is why, in this article, I decided to build some sense of correcting grammar in the English grammar enthusiast people by telling them the right ways of correcting the grammar without being tagged as Grammar Nazi.

Know when to correct someone:
Instead of just knowing than to correct the grammar of someone’s it is better to understand when it is appropriate to correct someone. Let’s take the examples of influences and authoritative figures in house like parents and guardians or in the office like managers and in schools like teachers, if you are one of them, then it is appropriate for you to correct the grammar of the people beneath you in relation or position without getting any tag of Grammar Nazi.

Comparatively, there are more positions in which it is inappropriate for you to correct someone’s grammar. Among the friends, coworkers, family members or just in the discussion with any stranger, you have to take some things into consideration before just pointing out the mistakes of others. Things like the level of necessity for the correction. You have to keep your urge of correcting others as calm as possible and only when you find difficult to understand any sentence, then only try to look it from the critic’s eye.

Know when you should not correct someone:
Because we are surrounded by all the devices and technology that is keeping us connected with non-English speaking nations too. That is why you will often interact with people who would make numerous mistakes in their English which build the temptation in you to correct those mistakes. That is why it is imperative for you to keep all the urges calm and know when you should not correct someone.

Before going on to correct someone, it is important for you to build a list of the reasons and check every reason after analyzing. The most imperative reason that should be checked in order to correct someone’s grammar is either the mistake changing the sense or meaning of the sentence or not. This is not only important for the people who are going to read this and also for the person himself. If this reason is not checked in your list, then you should not even try to correct the mistake of anyone or else you will be tagged as the Grammar Nazi.

Tips to correct grammar without getting any tag:

Even if you find necessary to correct someone, there are some ways through which you can show yourself polite. The following are a few tips that will help you in correcting someone’s grammar in the politest manner.

Do not correct someone publicly:
Even if you are correcting a kid, it is important not to hurt his feelings and self-respect. That is why it is important that before correcting someone, either online or in person, the privacy should be imperative. This is the most basic way of showing respect to that person and saving him embarrassment which he would have faced if you would have given to him by correcting his grammar.

Be Precise in your correction:
Instead of getting shy over correcting someone, it is important that you go précised and confident. Instead of starting yourself with the words like um, ah, actually, by the way, you should go for something substantial. The reason why it is important that you have to sound educated and a serious guy to the person whose mistake you are rectifying. That is why you have to think before saying it or else no one is going to think for a fraction of a second before tagging you as a Grammar Nazi.

Make sure you are doing it in the best way:
Now there is a difference between rectifying someone’s mistake in the right way and best way. The right way would be to create the logic in your rectification and satisfying the inner piece of the person. But finding the best way could kill all in one shot. Through the best way, you can understand the necessity of rectifications. The best way would help you in presenting your correction in a way of teaching the person instead of just judging his English speaking or English writing skills.

Use examples:
The best way that I also use to correct someone’s mistake is giving examples. For example, once watching the Doctor Strange, one of my friends pronounced the name of the leading actor wrong. He said the Benedict Cumberhatch has done full justice with this character. Instead of just taunting him by rectifying his mistake, I used the example of one of his interview in which the Benedict himself said that his name is the most badly pronounced named in Hollywood. Then I gave different pronunciation examples of his name and then finally pronounce the Cumberbatch with the right pronunciation. This is how I managed to rectify the mistake of my friend without even letting him feel any embarrassment.

Wrapping up:
In the end, it is all about how you convey your intentions of just correcting someone’s mistake without making him feel ridiculing. This is where your communication skills also count a lot and how well you understand others. But, for the absolute escape from the tag of Grammar Nazi, above points are enough for everyone and anywhere.

About the Author
Dominic Lester is a prominent writer and speaker on communication skills. You can follow him on LinkedIn, Twitter and G+ for updates.